On March 8th we fielded two hurling teams – the first time ever!

Our Junior Team made up from second class and third class pupils played their first ever match against Scoil Treasa Naofa with Cian as captain.  Everyone played well and had fun.

At the same time on the second pitch our Senior Team captained by Oisín were playing Griffith Barracks.  Again there was great skill shown and great sportsmanship also.

It was a successful day for St. Catherine’s N.S.!! 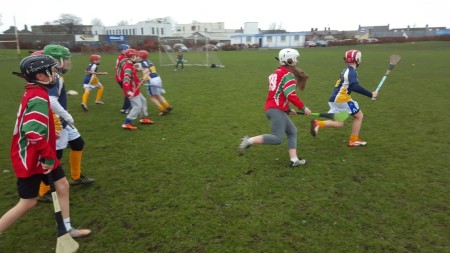 This year was the first time we entered the Cumann na mBunscoil Go Games Competition/League.  The excitement started on Tuesday 5th April when we travelled by bus to the War Memorial Gardens to play Gael Scoil Inse Cóir.  Unfortunately, we played a far superior team on the day and were very disappointed by our performance.  This all changed the following week when we played at home against St. Audeon’s.  Well done to Cameron, James and Cian who were our star players.  This week (Tuesday 26th April) we will be playing Mourne Road BNS.  Best of luck to everyone.